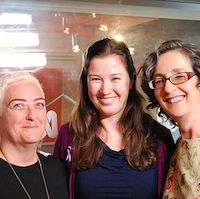 Jon Faine’s co-host is writer, broadcaster, film critic and commentator Prof Deb Verhoeven. She is the Chair of Media and Communication at Deakin University where she is Deputy Director of the Centre for Memory, Imagination and Invention.

Their first guest is women’s rights activist Dr Helen Pankhurst. She is a senior advisor to CARE International, based in the UK and Ethiopia. Helen is the great-granddaughter of the suffragette Emmeline Pankhurst, and granddaughter of Sylvie Pankhurst. She is in Australia ahead of the release of the new film Suffragette, which stars Carey Mulligan, Helena Bonham Carter and Meryl Streep.

There is a special Suffragette screening at Cinema Nova featuring Dr Helen Pankhurst in conversation with Mary Crooks, AO this evening (Tuesday 1 December, 2015) at 6.30pm.

Then they are joined by Renee Carr, the co-founder and Executive Director of Fair Agenda.
www.fairagenda.org